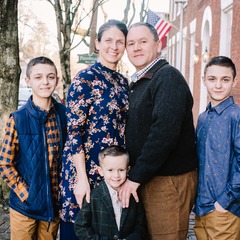 Pastor Fox was born in Cleveland OH, but spent most of his life in southern West Virginia. The First Lady was born and raised in Raleigh County West Virginia. Although they were initially introduced by an evangelist, they claim Grace brought them together as they had their first real conversation at Grace Book Store. Some credit does need to be given for family members setting up the first date, but Grace gets the ultimate glory!

This union has been blessed with three boys. Brendan is the oldest (by 4 minutes), Logan is next, followed by THE SURPRISE; Harrison!

Recognizing a need for a strong, vibrant Apostolic church in Washington county Virginia, they began having Bible studies at the Southwest Virginia Higher Education Center in Abingdon, VA. God is blessing this young church plant and we encourage you to come grow with us!